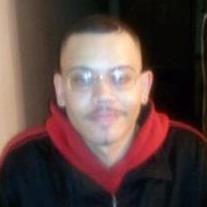 Darius Jonta Barnes Wright was born into the care of two loving parents, Rosie Wright Jackson and Harold C Barnes on May 26,1979 in Chicago, IL. His grandparents Harrison C Barnes (Mariah) and sister Helen Jackson proceeded him in death. Darius, attended Arthur Ashe Elementary School, Frank L Gillispe Elementary School, and Chicago Vocational High School where his exceptional artistic ability earned him a scholarship to the Chicago Art Institute. Darius affectionately known as Ta-Ta to all and LiL’ Trash to his most inner circle, was blessed with a one of a kind personality. His ability to find humor in almost any situation was sure to bring a smile to everyone’s face in his presence. He could turn any gathering into a party. His most prized possession in the world was his only son Darius born to him and the love of his life Shawana Fields. The true comedian he was, he loved to laugh. Darius came equipped with the gifts of a wordsmith. He was an exceptional artist with unlimited creative abilities. He had an extensive vocabulary that produced many sayings and phrases. Most of them exhibiting his unique character and most of them comical. “I’m Ta-Tilla The Raw Dilla” He was blessed with many talents which included basketball, dancing, writing, drawing and most of all rapping. His love for family and passion for music were undeniable. In September of 1998, Ta- Ta had a life altering event that confined him to a wheelchair. As a result of this event he became the ultimate soldier. Ta- Ta adopted the spirit of a heavyweight champion and defied every odd instead of being defeated. His positive outlook on any situation is something that he would want anyone he knew to take from him. Ta-Ta was one of the most loving and loyal friends that any man or woman could ever have. He had an army of special friends that he loved unconditionally. Special friends included Tori, AL, Dee and Susan. His best friend Alphonso “Big Moe” Garner and cousin Mark Samuels both proceeded him in death. On Monday July 9,2012 God called and Darius answered peacefully. Throughout his life Darius had unwavering faith. Darius had a strong spirituality in which he studied both the Holy Bible and the Holy Koran. He leaves to cherish many memories, as he touched the hearts of all that came in contact with him. His mother Rosie Wright Jackson, Father Harold C Barnes (Mary), Son Darius Shiwon Idae Fields, Grandmother Roberta Mcgee, Grandfather Adell Wright (Alvora), Sisters: Jennifer Wright Bankston, Karolyn Wright (James) , Jacalyn Barnes of Laurel MS, Brothers: Sean Wright, Harold Barnes Jr (Letica) of Shreivport LA, Timothy Bankston, Charles Bankston Sr. (Paula), Maurice Cross(Candy), Bobby Jones of Detroit MI , Brandon Jones (Ametra), Nieces: Adrianne, Brittini, Ebonee, Melissa, Dominique, Aliyah, Nephews: Charles III, Sean II, Rasean ,Shawn, Keonta, Daylon, Desandre, Isaiah Pleas, Two Great Nieces: Aubrey and Kailey-Rose Maternal Aunts: Carolyn(James), Patricia, Tania. Maternal Uncles: Michael, Dwight(Fadia) and a host of other Aunts, Uncles, Cousins and Special friends; all of who Darius cherished.

The family of Darius J Wright created this Life Tributes page to make it easy to share your memories.

Darius Jonta Barnes Wright was born into the care of two loving...

Send flowers to the Wright family.