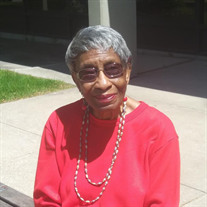 Eleanor Beatrice Braynon Brassfield was born in Miami, Florida on Friday, June 13, 1930. She was the oldest daughter of May Dell and Eddie Braynon. Eleanor was born into a loving and close knit family in the Railroad Shop section of Miami. She was a proud graduate of Booker T. Washington Senior High School(Class of ‘48) and Howard University(Class of ‘54). When she was unable to obtain a position as a Registered Pharmacist in Miami, her father secured a location at the corner of 8th Street and 3rd Avenue and she became the first Black female pharmacy owner in Miami Dade County. Eddie’s Drugs was a staple in the Black Community, both in Overtown and eventually in Liberty City as part of the Tri Arts Medical Building. She had the opportunity to mentor many young men and women going into the field of Pharmacy. She eventually retired from the University of Miami Hospitals in 1992. She married Wilfred Gibson in 1955 and to this union was born Lisa and Gail(deceased). Later in life she found her love, Thomas “Tom” Brassfield(deceased), and they lived life to the fullest. He was the one that got her hooked on sports. She was a faithful fan of ALL teams from Florida, especially the Heat and eventually became a fan of the Chicago Bulls. In 1992, she took on the role of “Grammie Ellie” and began traveling to and from Chicago. She was very proud of her 3 grandchildren, Alexander, Rachele and Krysten. She took her role as a Grandmother very seriously. Through the years, she was an active member of St. Paul A.M.E. Church from childhood and was participating in the Senior Ministry Program at the time she left Miami to live in Chicago. She was a member of Gamma Alpha Chapter of Iota Phi Lambda Sorority, Inc. and often reminisced about good times with her Sorority Sisters after chapter meetings and at conventions. Over the years, she traveled extensively, though there was a special place in her heart for any city with a casino! When she could no longer travel, she would enjoy her “recreational therapy” time at the local casinos. Eleanor moved to Chicago in 2011 and continued to live fairly independently into her 91st year of life until recently when she moved in with family. She attended River Oaks Chapel weekly and enjoyed interacting with the members. She always “rolled in” wearing her Sunday’s Finest. She was the oldest member of the congregation! She continued to make new friends and interacted with extended family whenever she could. In 2020, family and friends surprised her with 90 messages and cards for her 90th birthday. Last summer, she virtually participated in the Boswell-Jackson Family Reunion and shared cherished memories with those in attendance. Her big brother, Edward and nephew, Keith, were in Chicago just last month to visit her. She loved family and friends! The effects of a stroke that occurred on November 29, 2021 were devastating and proved to be more than she could handle. She passed away peacefully at home on January 7, 2022. She remained “sassy” and “classy” until the end. She was preceded in death by her parents-Eddie and May Dell Braynon, siblings-Gloria Braynon Watson and Harold Braynon, Sr, husband-Thomas Brassfield, daughter-Gail Gibson. She leaves to CELEBRATE her life, daughter-Lisa(Michael) Jackson, brother- Dr. Edward Braynon,Jr. grandchildren-Alex Jackson, Rachele Jackson, Krysten Jackson, godchildrenStanley Williams and Juanna Wasserman, life long friend-Franceil Tooks, a host of nieces, nephews, cousins, family and friends.

Eleanor Beatrice Braynon Brassfield was born in Miami, Florida on Friday, June 13, 1930. She was the oldest daughter of May Dell and Eddie Braynon. Eleanor was born into a loving and close knit family in the Railroad Shop section of Miami. She... View Obituary & Service Information

The family of Eleanor Brassfield created this Life Tributes page to make it easy to share your memories.

Send flowers to the Brassfield family.