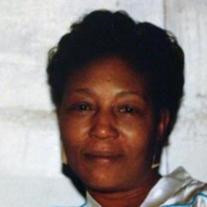 Ella Mae was born Jan 3, 1939 to the late Theo and Inez Brittenum in Madison, AR. She was raised by her grandparent's the late Rev. George and Irene Rivers. Ella confessed a hope in Christ at an early age at Rising Sun Missionary Baptist Church... View Obituary & Service Information

The family of Ella Rivers-Agee created this Life Tributes page to make it easy to share your memories.

Send flowers to the Rivers-Agee family.