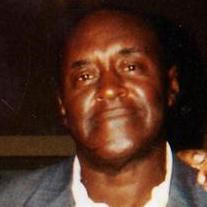 Elmo Jones was born November 19, 1933 in Holly Grove, Arkansas, to the union of Booker T. Jones and Johnnie Beatrice Jones. He was the second oldest of ten children. He is preceded in death by both parents; three sisters, Lerlene , Alta May... View Obituary & Service Information

The family of Elmo Jones created this Life Tributes page to make it easy to share your memories.

Send flowers to the Jones family.