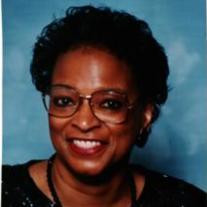 On December 22,1947, the angels in Heaven danced as Frank and Annie Mae Moran were given a beautiful daughter to love in the city of Detroit. They named her Gwendolyn Moran. Gwen, as she was affectionately called, was the fourth of eight children. Patricia L. Murray and Frank Moran JR. preceded her in death as well as her parents. Gwen was taught at an early age the importance of family and having a relationship with God. Gwen was truly a gift from God to her family and everyone who knew her. She was a woman of great faith and love. Gwen started her journey of faith at the age of eight (ushering since childhood) at the Ajilon Baptist Church in Detroit, and later joining Third New Hope Baptist Church in the summer of 1980. She was a faithful member of almost 30 years until relocating to Olympia Fields, Illinois. Once there, Gwen joined Trinity United Church of Christ, where she never stopped sharing and studying God's word. Gwen's heart, however, was always with the people at Third New Hope and her beloved Pastor E.L. Branch. During the years of Gwen's walk with God, she served faithfully in various ministries such as the Usher Board, a teacher for the New Member's class in the Christian Education Department and a number of other Church committees. Gwen had a natural love for the people of God, and with great joy, she served as a Christian clown, Rainbow Red, who spread God's word to children of all ages. Gwen was proud to be a Christian woman forever growing in Christ and a teacher of the Word. Gwendolyn married the love of her life, Stevenson Durning, SR., and the Lord blessed them with two cherished sons: Kevin and Stevenson Durning I. They raised them in a loving and supportive home while teaching about serving God and commitment to family. Gwen's sons were her reason for living. She was so proud of the men of God they had become. God blessed them to marry women who shared their views on God and family. In doing this, Gwen's legacy and love lives on. Family was important to Gwen. She showed that continually in her words of encouragement, laughter, wisdom, love and support. Every special day in the life of her family was a reason for her to celebrate. Gwen's grandchildren were her pride and joy. She planted good seeds into their lives every chance she got. Gwen was a natural giver. She once asked Pastor Branch after a bible class on "Gifts of the Spirit" what her gift was. Pastor Branch replied, "Gwen, your gift is giving." Time, money, good advice, and moral support were given freely to everyone. You could always count on her to give her all. Whether it be as the Queen of a Red Hatters Society Chapter, or contributing to many charitable organizations she clearly had a giving spirit. Gwen was a special supporter of PBS, the DIA, and a longtime donator to the "Goodfellows of Detroit". After graduating from Cass Technical High School in Detroit, Gwen worked for the State of Michigan for the Department of Social Services and later for the Michigan Department of Agriculture, where she became the first female Food Inspector and later the first female manager in the Detroit Region. Gwendolyn retired after 35 years of dedicated and committed service. People who loved her called her Mom, Grandma, Sister, Auntie, cousin, family and friend. She will be remembered for her sense of human and a quick smile. Gwendolyn leaves so many that were dear to her heart. Those who remain to remember and cherish her legacy are: two sons; Kevin Durning (Marilyn), Stevenson Durning, I (Jermaine), five grandchildren's; Keyla Whitfield Durning, Stevenson (II) and Dorian Durning, Joshua and Janaiah Durning; one sister Beverly J. McMillan(Ronald), four brothers Robert Haynes, Larry Moran( Marissa), Frank D. Moran (Angela), Michael Moran (Cynthia) and a host of nieces, nephews, cousins and dear friends.

On December 22,1947, the angels in Heaven danced as Frank and Annie Mae Moran were given a beautiful daughter to love in the city of Detroit. They named her Gwendolyn Moran. Gwen, as she was affectionately called, was the fourth of eight children.... View Obituary & Service Information

The family of Gwendolyn Durning created this Life Tributes page to make it easy to share your memories.

Send flowers to the Durning family.