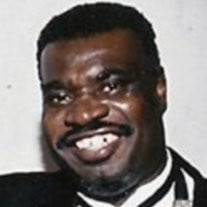 Harold James Dell was born January 15, 1955 to Walter and Ella Mae Dell in Chicago, Illinois. He was baptized and confessed Christ at an early age. He attended and graduated from Abbott Branch Elementary School in 1968. And, then attended and graduated from Tilden High School in 1972, where he was an All-City baseball player. On December 13, 1975, he was initiated into the Pi Eta Chapter of Omega Psi Phi Fraternity Incorporated, at Lewis University, and held the position of Keeper of Records and Seals. In 1976, Harold graduated with a 3.0 GPA from Lewis University with a Bachelor of Science in Political Science. He remained an active member of the fraternity and joined Nu Pi Graduate Chapter of Omega Psi Phi Fraternity Incorporated in which he again served as Keeper of Records and Seals and received the Outstanding Service Award. After working many years for various insurance companies, Harold started his own independent agency, H. Dell and Associates. He loved sports and, as an amateur bowler, won numerous titles, awards and trophies. He loved music and had an enviable record collection coveted by many. Harold served as Block Club president for many years, and was known to counsel and employ with small jobs many of the young men in the neighborhood. He and his wife were also known for their annual barbeques to which family, friends and neighbors came from all over the U.S. to attend. He leaves to mourn his passing his devoted and loving wife, Scarlet Dell; mother, Ella Dell; two daughters, Monique (Kevin) Peterson and LaSharra Dell; one stepdaughter, Akesha Coleman; one stepson, Floyd Coleman; three brothers, Willie Dell, Ray Dell and Maurice Dell; mother-in-law, Marjorie Cobbs; one sister-in-law, Karen (Andre) Harris of Lincoln, Nebraska; three brother-in-laws, Ronald Stephens, Carlos Altheimer and Kevin Altheimer; 14 grandchildren, one inherited daughter, Tarayan Johnson, one godchild, Tarquin Mackey; uncles, aunts, other relatives and friends. He was preceded in death by his father and one brother. He will be greatly missed.

Harold James Dell was born January 15, 1955 to Walter and Ella Mae Dell in Chicago, Illinois. He was baptized and confessed Christ at an early age. He attended and graduated from Abbott Branch Elementary School in 1968. And, then attended... View Obituary & Service Information

The family of Harold J Dell created this Life Tributes page to make it easy to share your memories.

Send flowers to the Dell family.