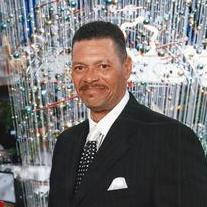 Deacon Harold Neiman April 26, 1951 - December 22, 2012 The firstborn of Harold and Pauline Neiman's four children, Harold Roger Neiman, Jr. was born on April 26, 1951. A shy, quiet child, he was very close to his brother, Kenneth, with whom he enjoyed swimming and softball. Early on, he adopted the philosophy of "business before pleasure". Harold knew that if he finished his chores early, his mother would have no reason to stop him from pursuing his leisure activities which also included television, especially Svengoolie. This philosophy made him successful throughout his life, particularly during his more than 20-year career for the Chicago Public Schools. At the time of his death, he was also a licensed stationary engineer. A lifelong resident of Chicago, Harold attended Charles R. Drew Elementary School and Frank L. Gillespie Upper Grade Center. He was a graduate of Harlan High School, where he excelled in both baseball and swimming. His skill with a bat earned him the nickname, "Demon Neiman". During the summers, Harold could be found on one of Chicago's many softball diamonds. As a young man, he played 16-inch softball with the Zodiac's. An excellent right fielder, he was the youngest player on the squad. This distinction led his teammates to call him, "Rookie", a nickname he loved all of his life. More than winning or losing, according to Harold, "being with the fellas" made everything worthwhile. In March 1987, Harold met Fabienne Williams. Attracted by her beautiful smile, he called her "My Fabe". The couple began dating. Soon, they were inseparable. Harold worked hard to prove himself "marriage material". In 1995, the couple married and their partnership, a relationship rooted in their love for God and their love for each other, solidified. In 2002, the couple entered the Diaconate Formation Program of the Archdiocese of Chicago. In 2006 Harold was ordained a Deacon. He served the Faith Community of St. Sabina until his death. Harold will be remembered for his last act on the Altar when he served with his wife, something he thoroughly enjoyed. The year before they married, Harold and Fabienne joined the Faith Community of St. Sabina. Together, they served in the New Members/New Believers ministry, the Ministry of Care, the Diaconate, and Lectors/Commentators Ministry. They also taught classes on HIV/AIDS prevention. Deacon Harold always maintained that he should preach the Gospel, using words if he had to. His gentle and kind presence on the altar did just that. So many things about Harold will be remembered fondly, including his impeccable sense of fashion and style, his smooth moves on the dance floor, his unique "two finger width" measurement of cake, his unfailing calm and raucous sense of humor, his passion for his favorite food (PBJ, & "brown and serve" rolls) and his favorite teams (the Chicago White Sox and the Chicago Bulls). He was loyal to his friends and dependable to his loved ones. Additionally, he was a man who loved his wife as Christ loved the church. On Saturday, December 22nd, the Lord called Harold to his eternal rest. He is preceded in death by his brother Kenneth. He leaves to cherish his memory his wife, Fabienne; his parents, Harold Sr and Pauline; his sister, Flavin and his brother David; his stepsons Wendell (Nicole) Fair and Christopher Rouffa; and his grandchildren, Wayne, Wade, Whitley and Haley Fair and Nicholas Clay; his uncle and aunt, Austin and June Johnson; an extended family of cousins, brothers and sisters in Christ and a huge circle of friends.

Deacon Harold Neiman April 26, 1951 - December 22, 2012 The firstborn of Harold and Pauline Neiman's four children, Harold Roger Neiman, Jr. was born on April 26, 1951. A shy, quiet child, he was very close to his brother, Kenneth, with whom... View Obituary & Service Information

The family of Deacon Harold Roger Neiman Jr created this Life Tributes page to make it easy to share your memories.

Send flowers to the Neiman family.