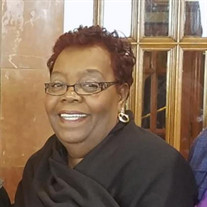 Irma Jean Kimbrew (Marsh) was born on June 19, 1945 in Chicago, IL to the parents of Sylvester Marsh Sr. and Izella Marsh (both preceded her in death). Irma was the third oldest of eight children. She was educated in the Chicago Public School system for both elementary and high school. Irma spent her formative years on the Westside of Chicago in the Maxwell and Halsted Street area. Living in that area was the foundation for some of her lifelong friendships, comradery and extended family relationships. Upon moving to the southside of Chicago in 1962, Irma graduated from Francis Parker High School where she then attended the International Data Processing Institute and successfully completed her formal training in data processing. Irma worked for Spiegel Inc. as a data processor/customer service representative for 34 years. Irma had a strong work ethic. She would leave her house at 5:30 am to travel to Downers Grove, Il, by bus, to make it to work for her 8:00 start time. Irma was also a faithful member of St. Charles Lwanga Catholic Church until its closing. After graduation, Irma married her childhood sweetheart, Arthur L. Kimbrew, in June 1967. Arthur and Irma were married for 27 years. After many years of marriage, Arthur and Irma had one child,Tyahna L. (Sha Sha) Kimbrew, who they both loved dearly. After Irma’s retirement, she held several jobs in which her most recent one, until her illness, was with the Department of Family & Support Services through the City of Chicago. Irma served wholeheartedly with the Foster Grandparent Program for 10 years where she received several awards for her distinguished service. Her foster grandchildren loved “Grandma Irma”. Irma never met a stranger. She had a vivacious and outgoing personality and always had a smile for you. She not only loved a good party, but oftentimes she was the life of the party. Living in the Englewood area (Dodge City) was always a good time to be had by all. Winter, Spring, Summer and Fall, she was the neighborhood Aunt, Godmother and friend. She would arrange snowball fights, go trick or treating with the kids, supplying them all with crayons for them to markup doors when candy wasn’t given out, fireworks on July 4th with a big finale and she would supervise the kids in the neighborhood in order for them to stay outside after the street lights came on. Irma always kept the music loud to keep the party going. Irma loved family and most certainly loved her daughter, Sha Sha and granddaughter, Imani. She spent her life being actively involved in Sha and Imani’s life, from girl scouts to cheerleading, Irma was there. Her husband, Arthur Kimbrew, parents Sylvester and Izella Marsh, one sister, Barbara Armstrong, 2 brothers Ernest Marsh and Raymond Marsh, Sr. and both maternal and paternal grandparents, all preceded her in death. Irma was called home by our Lord on May 28, 2020 at 1:30 pm. In her peaceful transition, Irma leaves to cherish her memories, her daughter, Tyahna (Sha Sha) Kimbrew, granddaughter, Imani Kimbrew Cross, one brother, Sylvester Marsh Jr. (Rosiland), three sisters, Theodria Constanoplis (Louis), Georgetta Jones (William), Kathryn Harris Looney (Lawrence), 2 brother-in laws, Joe Kimbrew (Queenie), Elmer Kimbrew, three aunts, Anna Marie Jones, Gwendolyn Jones and Janie Jones. She also leaves to cherish her memories, many nephews, nieces, grand nephews, grand nieces, great grand nephews, great grand nieces,and a host of cousins and many dear friens. We loved her too, but God loved her best.

Irma Jean Kimbrew (Marsh) was born on June 19, 1945 in Chicago, IL to the parents of Sylvester Marsh Sr. and Izella Marsh (both preceded her in death). Irma was the third oldest of eight children. She was educated in the Chicago Public School... View Obituary & Service Information

The family of Irma Jean Kimbrew created this Life Tributes page to make it easy to share your memories.

Send flowers to the Kimbrew family.