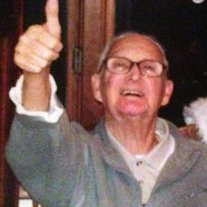 A Lover of Life Isaac Williamson, son of George and Jean Williamson, was born in Ypsilanti, Michigan, on May 16, 1936. He was the youngest of four children. A lifelong North Sider, Mr. Williamson grew up near the River Grove area. As a teenager, he met his wife, Connie Mondelli while ordering lunch at her parents' pizzeria. After months of chaperoned dates, they were married in April 1956. Into this blessed union were born two children, Susan Marie and Jaime Ann. On September 27, 2002, Connie lost her battle with pancreatic cancer with her soul mate by her side. Mr. Williamson or "Ike" to his family and friends was a no-nonsense, straightforward, at times persistent man. Always quick with a "thumbs up" or humorous tale, his generous heart caused him to be loved by many. Ike worked hard to support his family. Over the years, Mr. Williamson worked two, sometimes three jobs to provide for his wife and children. He started as a truck driver for Melray Parts and Tools. After the company went out of business, he started his own company, All Brite Cleaning Service. He provided commercial cleaning for large companies and warehouses. After years of working long hours 7 days a week, he retired his company. Later in life, he went to work for National Car Rental as a bus driver and soon became National's first CDL Trainer. He worked for National as their CDL Supervisor and Trainer until he retired in 2002. He loved training and working with people. Today, Ike is known for his love of people. Everywhere he went, he was known for his canny ability to reach people and make friends. Ike loved socializing and walking at the Schaumburg YMCA. He became quite the ladies man at the front desk and in his Senior's Zumba class. Ike made friends wherever he went. Ike passes on his "love for life" to his daughters Susan Akpede and Jaime Williamson; his son-in-law, Christopher Akpede; granddaughter, Trinity Faith Williamson; grandson, Christopher Isaac Iniwo Akpede; nephews, George Edward Wilson, Jr. and Dan Wilson, extended cousins and countless friends.

A Lover of Life Isaac Williamson, son of George and Jean Williamson, was born in Ypsilanti, Michigan, on May 16, 1936. He was the youngest of four children. A lifelong North Sider, Mr. Williamson grew... View Obituary & Service Information

The family of Isaac Williamson created this Life Tributes page to make it easy to share your memories.

A Lover of Life
Isaac Williamson, son of George and Jean Williamson,...

Send flowers to the Williamson family.