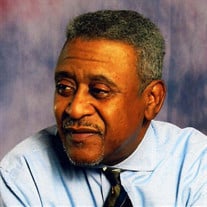 JOHN ROBERT ROSS was born in Chicago, IL February 6, 1943 to the union of Robert Manuel and Willie Laura (White) Ross, both parents preceded him in death. John graduated from St. Dominic Catholic Elementary School and DeLaSalle Catholic High School. During his freshman and sophomore years he was a member of the chess club, chorus and a class officer. In his senior year he participated in the booster club and was in the senior play. He continued his education in the Chicago City Colleges. He served his country in the Armed Forces where he was a paratrooper. He was honorably discharged. John committed his life to Christ in his youth. Later he united with the Apostolic Church of God In Christ where he faithfully served on the men and discipleship ministries. John retired from Illinois Central Railroad where he was an account rate clerk for more than thirty-five years. He was also an officer for the railroad union. He was a tax consultant after his retirement. On September 17, 2005, John started a new journey on his life’s journey. He became a member of the Evans Ave. Early Bird Group and SEADAC Tuesday night Group. He served as Alternate Treasurer in his district until the time of his death. With God’s help John accumulated 3,521 consecutive days of sobriety. That’s 9 years, 7 months and 23 days. One Day at a time. Like those before him John carried the message of hope to many who felt hopeless.. John would often say “God led me to AA and AA led me back to God” John enjoyed spending time with family and friends, especially the “O’PALS” when food was involved, because he loved to eat and he did it well. He loved to play word board games and make up words as he went along. John was truly a joy to be around since he was an amateur comedian.’’ He was always well dressed and he impressed all he came in contact with, no matter what the arena. John’s presence will definitely be missed but he has left those of us that loved him with so many wonderful memories to share with each other. He was an avid basketball and football fan. On Sunday, May 10, 2015 John answered the call from earth to glory; he leaves to cherish his memory one daughter, Melani; one grandson, Marshawn; one granddaughter, Mpatanishi; one sister, Betty (Leonard); nieces, nephews,, cousins and many extended family members, who called him brother, uncle and frie

The family of John Robert Ross created this Life Tributes page to make it easy to share your memories.

Send flowers to the Ross family.