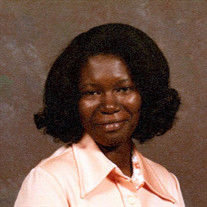 January 3rd, 2016 Josephine Jackson went home to be with the Lord. On September 18, 1955, in Chicago, IL, Josephine was born as the second child of Joseph Sr. and Carrie Jackson. Josephine received her education from Lincoln Elementary and Kellar Middle School in Robbins, IL and her High School Diploma from Dwight D. Eisenhower in Blue Island, IL in 1973. Shortly after graduation she met Ricardo Johnson of Chicago, IL and was blessed with her first son Richard (Ricky) Jackson on December 28th, 1974. She received another blessing when she had her second son Rayverne (Ray) Jackson on June 2nd, 1977. On July, 17th 1978 she received her final blessing of children when she gave birth to her daughter Janet Jackson. Josephine knew the Lord at an early age and in August of 1981, with the help of her church ministry, she and her three children relocated to Benton Harbor, MI. Josephine worked very hard to support three young children on her own, and at times working two jobs to provide the best she possibly could for her kids, whom were the center of her world. Josephine was extremely proud to have three children whom all graduated in the top ten of their high school classes and each being first generation college students; when Richard attended the University of Notre Dame and Tuskegee University, and both Ray and Janet attended Western Michigan University. In 2001, Josephine again relocated, by moving to Kalamazoo, Michigan to be closer to her son and daughter when she began to experience some medical issues. Josephine had several past-times and was advent reader. You would often find her speed reading through novels such as period pieces by Jane Austen, Little Women, Ann of Green Gables, or Little House on the Prairie. Of course if you didn’t find her leisurely reading, you would definitely find her studying her Bible. In addition to reading, she also enjoyed crocheting, doing large jigsaw puzzles, watching TV, playing games on her tablet, going to bingo with her daughter, and most recently, playing cashword scratch-off tickets. Josephine was preceded in death by both her parents-Joseph Sr. and Carrie Jackson; Sister-Ruth Johnson, Christine Jackson, and grandson-Gabriel Jackson. She leaves behind three loving children Richard, Rayverne, and Janet Jackson, one grandson Giovanni Jackson, three brothers Joseph Jr., Clarence, and Sidney Jackson; two sisters, Betty and Elaine Jackson and a host of other relatives, nieces, nephews and family friends.

January 3rd, 2016 Josephine Jackson went home to be with the Lord. On September 18, 1955, in Chicago, IL, Josephine was born as the second child of Joseph Sr. and Carrie Jackson. Josephine received her education from Lincoln Elementary and... View Obituary & Service Information

The family of Josephine Jackson created this Life Tributes page to make it easy to share your memories.

Send flowers to the Jackson family.