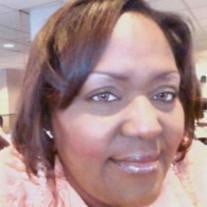 Our jewel, Julie Ann Brown, was born on December 11, 1956 to Daniel Lee and Annie Mary Brown. She was the 1st of 5 children. Her parents and sister Patricia preceded her in death. Born in Chicago, IL her family moved to Robbins, IL. She attended Bernice Childs Elementary School, Keller Jr. High and graduated from Dwight D. Eisenhower, Blue Island, IL. After moving to Maywood, she attended Triton College, William Woods College (Fulton, MO) and Roosevelt University. At age 10, she accepted Christ as her personal savior and was baptized at Campbell Temple C.O.G.I.C.; around the same time, her musical journey began. Julie had to remind her dad of the bi-weekly organ lessons at Dixie Square Mall. Often times, Dan was too tired from work so he made the decision to take her on a few test drive before handing her the keys - citing she was big enough to drive on her own. Julie had no children of her own, however she stood in the gap and raised her sister Pat’s 3 children, Abigail “Abbey” Williams (PHD student/ social work), Bernard “Walt” Williams (CNA/Nursing student), Jennifer “Jenny” Williams (General studies student). “Jules” began honing her financial skills at Citibank (Citicorp) in the Accounting Dept. Showing promise, she was requested to work in the student loan and mortgage dept. Highly recommended, Julie was recruited to RBC (Prism) Mortgage as an Underwriter. Through creativity and dedication, she was asked to revamp and manage the Government sector. With full hiring power, 100% of her staff was made of youth choir members from various churches. When phased out, Julie was allowed to create her next position for the company’s training & development division. Recognizing her efforts, she was promoted to Corporate Trainer over the entire US & Canada. At Christmas, she organized the RBC choir, recording the soulful version of Handel’s Messiah as part of a CD promotion for the company. As a hobby for 20+ years, Julie assisted in finding accommodations for participants attending the Church of God In Christ’s Holy Convocation. Julie was a prodigy molded by her parents “Dan and Ann”. Her music ministry spanned over 35 years even though she began singing and playing at an early age. She worked with many churches, Faith Temple C.O.G.I.C (Pastor William H. Allen), Roberts Temple C.O.G.I.C. (Cleven Wardlow), Carey Tercentenary AME (Walter C. Harris), Just Faith Full Gospel (Walter Veal). She was also very active in National and State events in the Church of God In Christ. Freedom Temple C.O.G.I.C. (Bishop Cody V. Marshall) was her last church home. While attending, Jules was a faithful servant throughout her illness until going home to be with the Lord. To name a few accomplishments, she regularly volunteered as the receptionist / secretary, was an active missionary that also worked with the youth choir. Under the umbrella of Calco Urban Care, the community’s outreach ministry expanded. She developed a computer lab, spearheaded an affordable full day Summer Camp, a site for the Summer Food Program, Vacation Bible School, and annual job fairs. Her gift for working with young people was most evident with the outstanding youth choirs. Many ministries and professionals were cultivated and nurtured through her love and support. Julie took flight on Friday, September 21, 2012 at CHECK TIME pm She leaves to cherish her fond legacy: sisters, Lydia Marie Matos and Michelle; brother, Stewart Donnell; nieces, Abbey, Jenny, Adriana Matos, Stacey and Jessica Williams; nephew, Walt; aunts, Katherine and Clarette; uncles, James and Cleophia; a host of cousins, surrogate mothers, nieces, nephews and children; and countless close friends.

Our jewel, Julie Ann Brown, was born on December 11, 1956 to Daniel Lee and Annie Mary Brown. She was the 1st of 5 children. Her parents and sister Patricia preceded her in death. Born in Chicago, IL her family moved to Robbins, IL. She attended... View Obituary & Service Information

The family of Julie Ann Brown created this Life Tributes page to make it easy to share your memories.

Send flowers to the Brown family.