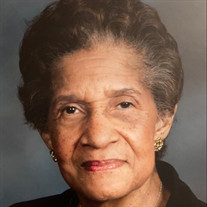 Lina Beatrice Falls, beloved mother, grandmother, sister, aunt and friend began her life journey on February 5, 1931, in McCool, Mississippi. She was the second child of eleven children born to Hershel and Sedonia Dotson, both of whom preceded her in death. Lina attended Mary Holmes Junior College in West Point, Mississippi. In 1952, she left the south and moved to Chicago which she describes as one of the most beautiful places she had ever seen. There she married her beloved Bruce C. Falls on December 10, 1960. To this union God blessed them with five children, Bruce, Jr., Rita, Dwayne, Daphne, and Stephanie. Lina was employed in the healthcare industry working as a nurse’s assistant and medical office manager at Columbus Hospital for 45 years until she retired in 1996. Everyone around her knew she had the best pound cake “on this side of the Mississippi.” Lina was an excellent cook and meals at her home were plentiful with homemade dishes that filled stomachs with several helpings. In addition to her baking and cooking skills, Lina could style anyone’s hair, which led her to go to cosmetology school. She received her cosmetology license shortly after attending school and was a master stylist. She always put family first. After retirement she dedicated her entire life to her biological family and church family. Her mission was to help others. She spent time volunteering at schools and mentoring young children. She loved traveling with her family, especially back home to Mississippi. Her goal was to have an active presence in the lives of her children and grandchildren. She was a member of the PTA at Altgeld Elementary School and served on the Local School Board Council at Harper High School. Lina was a faithful and loyal member of the Faith Community of St. Sabina since 1967. She was an active member of the St. Sabina Women’s Club and she served as a Lector and Commentator proclaiming God’s word on Sunday mornings. She was a mother to the church community and was a blessing to many. She was affectionately called Mama, Madea and Mama Lina B. Her gentle spirit and her calm demeanor were infectious. Her positive attitude and her words of encouragement to her family and friends have left an indelible mark on their lives. She loved the Lord with her whole heart and served Him all her days. She was an inspiration to all who knew her and grew to love her. Lina’s recipe for success is to find a vision, pursue it, fight for it, and watch God bless it so that nothing will be impossible. Lina B. Falls departed this life Wednesday, April 22, 2020 surrounded by her family while listening to the song, “Safe in His Arms”. Lina will be missed by all those whose lives she touched. She joins in Heaven her parents, Hershal and Sedonia; husband, Bruce C. Falls; son, Dwayne Henry; siblings: Cleotha, Walter, James Andy, Quentin, Eddie Lawrence, and Joyce; sister-in-law, Mary Dotson; brother-in-law, John Whitfield; and son-in-law, Charles Williams, Sr. Lina leaves to cherish her memories 4 children: Bruce, Jr., Rita, Daphne (Anthony) Savage, Stephanie (Herman) Warr; 4 siblings: Mazaree Whitfield, Warren (Mary) Dotson, Aubrey (Wardean) Dotson, and Barry Dotson; one sister-in-law, Doris Dotson; 10 grandchildren, 17 great grandchildren, and a host of nieces, nephews, cousins, and friends. Rest now Lina B. Falls. You are now safe in the Master’s Arms.

Lina Beatrice Falls, beloved mother, grandmother, sister, aunt and friend began her life journey on February 5, 1931, in McCool, Mississippi. She was the second child of eleven children born to Hershel and Sedonia Dotson, both of whom preceded... View Obituary & Service Information

The family of Lina B Falls created this Life Tributes page to make it easy to share your memories.

Send flowers to the Falls family.