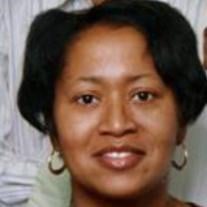 Lori Ann James McBride was born on December 29, 1964 in Chicago, Illinois to Ann Crowder and William Crawford (both preceded her in death). One brother, Edward and one sister, Patsy also preceded her in death. Lori attended Carnegie and Wadsworth Elementary Schools and Hyde Park Career Academy High School. Lori’s love of caring for people began early on as she became a LPN immediately after graduating from High School. Lori married the love of her life, Byron McBride on December 24, 1990. To this union, four children were born. Lori accepted Christ at an early age and served the Lord all the days of her life! Lori’s love for life was evident in all that she did. Lori would always tell her children “Rise and Shine and give God the glory, glory! She instilled in them that “if you can’t say anything nice, don’t say nothing at all”! And everyday on their way out the door to school, she would tell them “love you, smooches, mean it, have a great day, be good, be prayerful … Make it an A day, BayBay! She would tell us older folks … “with your pretty self” and “service with a smile”. Lori loved people, especially “her babies”. Any child that came in contact with Lori, was “her baby”. Lori loved the LORD with all her heart, mind, body and soul! Lori joined the Burnside Community Baptist Church on September 25, 2005 along with her husband and children. She immediately won our hearts and became active in the following ministries: Big Sisters, Children/Youth, “Especially for You” feeding ministries and our Pre-Sunday School Breakfast ministries. We had to keep a close eye on her during our feeding outings because she would check the trash to remove the aluminum pans, for re-washing & re-using. It was always a big laugh to run Lori away from the trash bags! She was truly a “willing worker” right up to end of her days – always trying to help someone else. Lori leaves to cherish her precious memories, her loving husband Byron, four devoted children, Breah, Brennan, Braxton and Brielle. She also leaves four sisters, Linda, Anita, Joan and Brenda; and one brother Brad. She leaves her mother and father-in-law, Billy and Jean McBride. She leaves a host of nieces, nephews, cousins, other relatives and friends and her BCBC Family.

Lori Ann James McBride was born on December 29, 1964 in Chicago, Illinois to Ann Crowder and William Crawford (both preceded her in death). One brother, Edward and one sister, Patsy also preceded her in death. Lori attended Carnegie and Wadsworth... View Obituary & Service Information

The family of Lori A McBride created this Life Tributes page to make it easy to share your memories.

Send flowers to the McBride family.