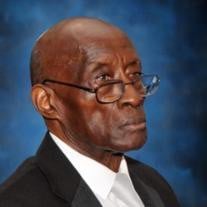 Richard Bell, was born on December 1, 1930, in Dothan, Alabama to Edith Jordan who preceded him in death. Richard, affectionately known as "Bell" by many had an older sister, Doris Bell and a younger brother, Gene Bell who both proceeded him in death. Richard was a devoted child of God who gave his life over to the Lord at a very early age. Richard met Flora Lynn and in July 1951 they were united in holy matrimony in Eufaula, Alabama. In 1952, Richard and Flora moved to Chicago Illinois where their six children Martha, Richard Jr., Jerry, Loretta, Billy and Doris, were born. Richard worked very hard as a union welder putting in long hours at work. He retired after more than 35 years of diligent service. Richard loved to sing and in 1959 he became a member of the Sensational Harmoneer's where he sang Tenor, and managed bookings for group performances. Richard had a extremely kind and giving heart; always was there to help those in need. If he had it to give, it was yours ! Richard was never quick to anger and had a kind word and prayer for everyone. He was hilarious at times and always had funny stories to share about his early years as a Sensational Harmoneer. When you got to know him, you instantly liked him and enjoyed being in his company. Richard departed this life on January 8, 2013. Richard leaves to cherish his memory three beautiful daughters: Martha House (Ernest) of Chicago IL, Loretta Muller (Mark) of Norfolk, VA, and Doris Foster (Jerome) of South Holland IL. Three sons: Richard Bell Jr. (Sonya) of Arlington TX, Jerry Bell of Chicago IL, and Billy Bell of Chicago IL. He was blessed with eight grandchildren: Marquee, Tellie, Derrick, Kelli, Marcella, Ian, Donovan and Evan. Six great grandchildren: Amiya, Ryan, Tamia, Taniqua, Jaylen and Isabelle, and a host of relatives and friends.

Richard Bell, was born on December 1, 1930, in Dothan, Alabama to Edith Jordan who preceded him in death. Richard, affectionately known as "Bell" by many had an older sister, Doris Bell and a younger brother, Gene Bell who both proceeded him... View Obituary & Service Information

The family of Richard Bell created this Life Tributes page to make it easy to share your memories.

Send flowers to the Bell family.