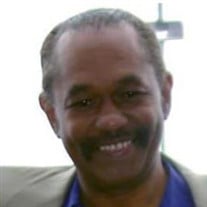 Thornton Jeremy King II was born on January 16, 1958 in Eufaula, Alabama to the late Rosa Bandy and Thornton King Sr. To those he grew up with, he was known as Junior. To those who knew him in his adult life, he was TJ. He had a passion for cars since the age of three. He played the alto saxophone in marching band and graduated from high school at the age of 16. Furthering his education, he attended Tulane University in New Orleans, Louisiana. He decided to move to Chicago, Illinois where he studied at Chicago Community Colleges and DePaul University. During this time, you would occasionally see him on Chicago’s WCIU channel 26 dancing. He was an avid music lover of the disco era, soul music and smooth jazz. He loved weightlifting and sports, specifically football. He even customized his van after the Dallas Cowboys Team colors. With this van, he would drive 14 hours with his children and wife four times a year to see his parents in Eufaula, Alabama. Thornton spent most of his time with his family creating lots of laughs and memories. Thornton was a man of few words, but when he did speak, it spoke volumes to the type of man he was. His demeanor was always calm, cool, and collected along with a sarcastic humor. Hence, his email address of ‘otokool’. His smile and laughter were contagious. He always had the perfect advice to give a person no matter the occasion. He was a selfless man that never complained and was loyal to the people in his life. He is survived by his wife of 39 years, Darlene; daughters, Jenine, Rosa, Thorntenya, and Jena; daughter-in-law, Javon; sons, Rene and Thornton; son-in-law, Jonas; grandchildren, late Rene, Justyn, Jayda, Davon, Jonas, Jori, Emeri, and Tejai; nieces, Diane and Lionette; great-nephew, Anthony; many cousins, aunts and uncle. Thornton was recently preceded in death by his sister Gwendolyn. While his life ended prematurely the morning of March 22, 2021, we are at peace knowing he was able to finally rejoin his mother above the clouds, who above all he loved most dearly. He will always be with us and will continue to be a beacon of light in our lives forever.

Thornton Jeremy King II was born on January 16, 1958 in Eufaula, Alabama to the late Rosa Bandy and Thornton King Sr. To those he grew up with, he was known as Junior. To those who knew him in his adult life, he was TJ. He had a passion for... View Obituary & Service Information

The family of Thornton J King II created this Life Tributes page to make it easy to share your memories.

Send flowers to the King family.