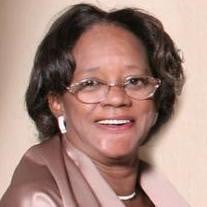 Victoria Davis, affectionately known as Vicky, was born in Chicago, Illinois on October 8, 1951 to the union of Geraldine Ramirez and Jessie James. In the 1990’s she moved to Mount Vernon, Illinois and later moved to St. Louis, Missouri before returning home to Chicago in 2011. Vicky was initially baptized as a Catholic and was later confirmed in the Christian Faith. She rededicated her life to Christ and became a member of United Praise Ministries under the leadership of Pastor Major Matthews. Vicky loved life and had a way of making everyone smile. She had the biggest heart and a giving spirit. If you were around her and said you liked something, she would do her best to get it for you. If you came in Vicky’s presence, she had a natural way of making friends whereas you became part of the family. She opened her house to anyone in need. Vicky enjoyed playing cards, watching horror, crime and western movies and cooking. Her favorite dishes were red beans and rice, fried chicken, chicken and noodles, smothered potatoes, and devil eggs. People knew when they entered Vicky’s house she would beat them in playing Spades but comfort them with a good ole home cooked meal. On February 1, 2012 while surrounded by her family, Vicky departed her earthly dwelling place to be present with the Lord in heaven. She was preceded in death by her mother Geraldine Ramirez, sisters Patricia Gaudet and Sharman Taylor and brother, Moriel Gaudet. Vicky leaves to cherish her precious memories, three daughters: Geraldine (Aaron) Brown, Angela Gardet, Clonise Gardet; one son: Reuben (Bridget) Gardet; six sisters: Charlouise Levi, Carla Brandon, Sandra (Don) Edwards, Catherine (Linsbert) Reynolds, Gail Roman and Lisa Moore; two brothers: Terrence Gaudet and Ronald (Yvonne) Gardet; 17 grandchildren, 15 great grandchildren and a host of nieces, nephews, family and friends.

Victoria Davis, affectionately known as Vicky, was born in Chicago, Illinois on October 8, 1951 to the union of Geraldine Ramirez and Jessie James. In the 1990’s she moved to Mount Vernon, Illinois and later moved to St. Louis, Missouri before... View Obituary & Service Information

The family of Victoria Lee Davis created this Life Tributes page to make it easy to share your memories.

Victoria Davis, affectionately known as Vicky, was born in Chicago,...

Send flowers to the Davis family.