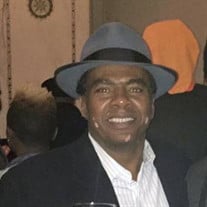 Vince Anthony Clark was born on February 25, 1968 in Chicago, Illinois to the late Carolyn and Henry Clark. His parents were loving, faithful followers of Christ and instilled the same in their children. Vince was the sixth son born of ten children. Vince attended John Altgeld Elementary School, and graduated from Simeon HS in 1982. He later attended DeVry College 2 Corinthians 5:17 In 1981, at the age of 13 Vince accepted Christ as his Lord and Savior at Central Missionary Baptist Church where he served faithfully. Vince began working for the Faith Community of St. Sabina’s summer youth program in a temporary maintenance position. Vince strong work ethic, his knowledge of computers, creativity and extraordinary communication skills landed his career job. Vince worked after school and weekends until he finished school, became a fulltime employee and later the assistant to Pastor Michael Louis Pfleger. Fr. Pfleger was Vince’s pastor, spiritual leader, boss, mentor and best friend. Vince never took for granted their friendship. In fact, even when Vince was not feeling his best, he didn’t allow his illness to keep him from doing what God called him to do. Vince was a strong soul, a gentle, giving spirit, with a bright and infectious smile. Vince was loved and respected by his coworkers as well as his church family, where he served as head of the Sound Ministry. Genesis 2:22-24 On July 19, 1997, Vince married the love of his life, Cheryl Moss. Vince was a devoted husband who adored his wife. He was extremely proud to be married to Cheryl and would do just about anything to make her happy; from the elaborate surprise wedding proposal to the thoughtful gifts that were given just because. Vince truly loved his wife the way that Christ loved the church. He was everything a husband should be! Proverbs 22:6 On March 11, 2003, Vince’s dream of becoming a father became a reality as he and Cheryl welcomed their son Chazz Anthony Clark into the family. To simply say “Vince loved his son” or that he was a “devoted father” doesn’t quite capture the essence of what being a father meant to Vince. From the moment Chazz took his first breath, Vince set out to be the example of what a man of God should exemplify. He made sure that Christ was the foundation on which his family was built. Vince always provided the best for Chazz. Vince believed in firm discipline when needed and high praise often. When Vince wasn’t working he was often seen coaching Chazz in baseball or cheering him on from the sidelines. Baseball was a huge part of their “father son time” together! They loved going to White Sox games, as well as traveling to other cities to see their favorite teams play. Yes, Vince Clark loved his son and his son loved him! 1 Thessalonians 4:13-14 Vince made his transition on Saturday, January 16, 2016. He leaves to cherish his memories a loving and devoted wife Cheryl, Son Chazz, Mother-in-law Geraldine Moss, siblings Derrick, Glenn (deceased) Margaret, Brian, Marvin (Nadine), Craig (Shirley), Shawn (Melissa), Christina, Angela (Alex) and Dorenda, Two Brother-in-laws Derrick Moss (Deborah), Fred(Deborah) one Sister-in-law Debra Lawson, Best friend Pastor Michael Pfleger, and countless family members and friends

Vince Anthony Clark was born on February 25, 1968 in Chicago, Illinois to the late Carolyn and Henry Clark. His parents were loving, faithful followers of Christ and instilled the same in their children. Vince was the sixth son born of ten... View Obituary & Service Information

The family of Vince A Clark created this Life Tributes page to make it easy to share your memories.

Send flowers to the Clark family.