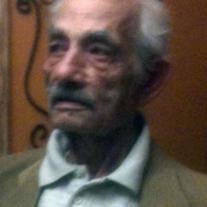 Virgil C. Travis affectionately known as “Papa” was born December 30, 1919, in Canton, MS to Charles Authur McClure and Annie Travis. He was the third child of nine siblings. Virgil was educated in the Madison County Public School System. He would often relate his difficult school experiences as well as the difficulties of segregation. As a young boy, Virgil was the favorite of his older sister, Ruby. They lived on a very large farm, and he and his siblings spent a lot of time outdoors riding horses, going fishing, hunting, and swimming. They each had their own “livestock” and garden which they nurtured and cared for. Virgil’s father instilled a strong work ethic in him and his siblings and made sure that they knew the “value of a dollar” in order to be successful in this life. Virgil remembered the values and lessons his father imparted and wanting to see the world outside of Mississippi, he left Canton at the age of 16 and ventured to Chicago. There he worked several jobs including working at the stockyards, working sales, and working other jobs while trying to find his purpose. To fulfill his desire to see the world and travel, he became a Pullman Porter on the railroad where he traveled between Chicago and California on the train named the “City of New Orleans”. During this time on January 8, 1944 the “apple of his eye” his daughter Brenda was born. In 1951 his son Myron was born. Virgil finally knew what he was destined to do with his life and became a painter. He returned to Chicago and enrolled in Washburn Trade School earning certification in painting, plastering and paper hanging. Shortly thereafter, he completed an apprenticeship with National Decorating Service where he became master of his trade as a professional painter. In addition, he owned and operated Travis Decorating Service. As a master painter, he painted several Chicago landmarks including the antenna on top of the Prudential Building, Standard Oil Building, the gold letters on the Chicago Sun-Times Building, Marshall Fields, Wiebolts and Company and various other buildings around Chicago. In 1964 he met and married Betty Doty and to this union one son, John was born. Virgil worked with National Decorating Service for over 25 years until he retired at the age of 62. Virgil had many hobbies; most notable he was a semi-professional bowler, traveling across the country and having attained at least one 300 perfect game in his career. He was an avid fisherman and fished throughout Illinois, Michigan and Wisconsin. He also loved to go boating, and one of his favorite pastimes was going to the casino. He enjoyed sitting and smoking his pipe and later in life, smoking his Swisher Sweets Cigarillos, with a tip. He had a way with words and some of his favorite sayings were “Oh me,” “Never had it so good,” “I’m a lucky man,” “What you doin foolin?” Papa loved his family and never missed a family gathering until his health prevented him from attending, but he never missed a meal because he got a carry out of whatever was being served. He loved his grandchildren and great grandchildren. He especially liked spending time with his grandson Jonathan whom he taught to drive at the age of twelve, which was a VERY BIG mistake. He particularly loved his meat and potatoes. His favorite desserts were coconut cake, apple pie and a big scoop of Breyer’s Vanilla Bean Ice Cream. To know Papa was to love him. He had an uncanny sense of humor and a way with words. Virgil is preceded in death by all of his siblings; Ruby, Pauline, Frances, Annie, Mary, Wilson, Jessie, (also known as Teddy), William (also known as Babe), and his parents Charles and Annie. Virgil did not attend church often, but he had a deep faith. With his son Myron at his side, Virgil accepted Christ as his personal Savior. Virgil departed this life to be with his heavenly Father on Thursday, February 9, 2012 at St. Margaret Mercy Hospital in Hammond, IN. He will be missed greatly, but the memories he has left will last forever. He leaves to cherish his loving memories a daughter, Brenda Garth of Evergreen Park, IL; two sons: John (Rhonda) Travis of South Holland, IL and Myron Crowe of Chicago, IL; eight grandchildren: Robert “Bobby” (LaWanda), Myron, Schuyler, Marla ”GiGi”, Robin, Kimani, Anita and Jonathan; 18 great grandchildren, 17 great-great grandchildren; seven nieces; six nephews; a special cousin, Hilton Joseph; a special friend in Betty Travis, and a host of great nieces and nephews, cousins, other relatives and friends.

The family of Mr. Virgil C Travis created this Life Tributes page to make it easy to share your memories.

Send flowers to the Travis family.