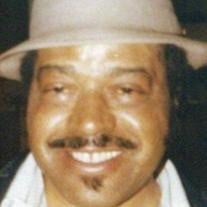 WILLIAM CARLYLE HILL was born on October 24, 1926 in St. Louis MO, the eleventh of twelve children to Samuel F. and Anita Brown Hill, who preceded him in death along with six brothers, Samuel, Edmund, Marvellus, Angelus, Edward and Virgil; and three sisters, Lorraine Hill Thompson, Felice Hill Gaines and Marcella Hill Price. As a young child Bill was baptized into the Catholic faith. While he was not a church-going person, he lived a Christian life of love and service, generously giving to and helping anyone in need. He was especially kind and attentive to his brother-in-law, Robert Price, during his final illness, coming faithful two to three times a week to bath and shave him. Bill was not one to “talk the talk” but he definitely tried to “walk the Christian walk.” Bill graduated from Simmons elementary school in 1941 and was a star football player for Summer High School in St. Louis. All of his life he was an avid football fan and a loyal supporter of “da Bears!” Anyone who knew Bill knew not to call him during a Bears game! After high school Bill moved to Chicago to live with his sister, Marcella, and brother-in-law, Robert. Earlier in his adult life he worked in receiving at Crowe Name Plate and Engraving Company. Later he worked for the Marsh & McLennan Companies from 1972 until he retired in 1991. Bill was a loving and devoted husband to his wife, Gwendolyn, who preceded him in death on February 4, 2011 and a loving step-father to Joyce Hawkins (Roy Sr.), Carol Brown (Steve), Margaret Stinson (John), Denise Shelton (Earl), Frances, Edwin and David Rogers, “grand-dad and great grand-dad” to ten grandchildren including his closest buddy, Robert, and eleven great-grandchildren. Bill entered eternal life on September 24, 2011 one month to the day shy of his 85th birthday. In addition to his step-children and grandchildren he leaves to celebrate his life his two loving brothers, Alvin (Mable) Hill, and Roland (Delores) Hill, sisters-in-law Mildred Bush, Alice (William) Dunger, brother-in-law Alex (Doris) Williams, devoted nieces, Sister Anita Baird and Corrine Grant; Troy Kelly, faithful friend and companion during the last few months of his life; and a host of nieces, nephews, cousins and friends including his “8915” neighbors.

WILLIAM CARLYLE HILL was born on October 24, 1926 in St. Louis MO, the eleventh of twelve children to Samuel F. and Anita Brown Hill, who preceded him in death along with six brothers, Samuel, Edmund, Marvellus, Angelus, Edward and Virgil; and... View Obituary & Service Information

The family of William Carlyle Hill created this Life Tributes page to make it easy to share your memories.

Send flowers to the Hill family.